Over half of humanity under lockdown as 2.2 million cases reported worldwide and global fatalities surpass 150,000 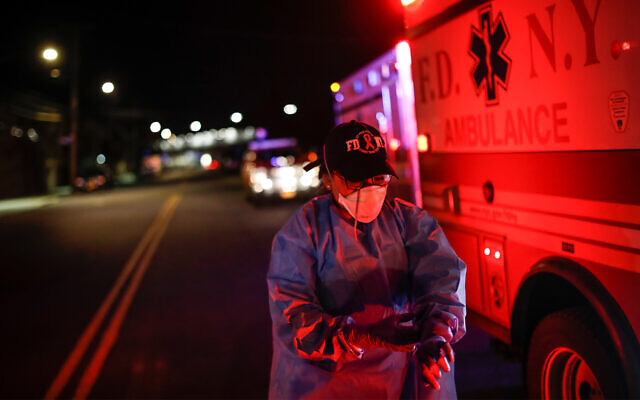 A paramedic suits up in personal protective equipment on an emergency call for a man in the Bronx, New York, April 15, 2020.

World coronavirus deaths passed 150,000 Friday, with the US recording 700,000 confirmed infections and 36,000 deaths, far more than any other country in both categories.

As COVID-19 fatalities mount in the US and hard-hit Western Europe countries, fresh data on rising infections and deaths in Africa showed the virus is leaving no continent untouched as it marches around the globe.

More than half of humanity — 4.5 billion people — were confined to their homes, with evidence mounting of social distancing’s success in slowing the pandemic.

But widespread nervousness remained over when and how to ease widespread confinement measures to revive the world economy, battered by what the International Monetary Fund has dubbed the “Great Lockdown.”

More than 2.2 million cases of COVID-19 have been reported in 193 countries and territories, according to figures collected by AFP from national authorities and information from the World Health Organization (WHO).

The numbers probably reflect only a fraction of the actual number of infections however, because many countries are testing only the most serious cases. 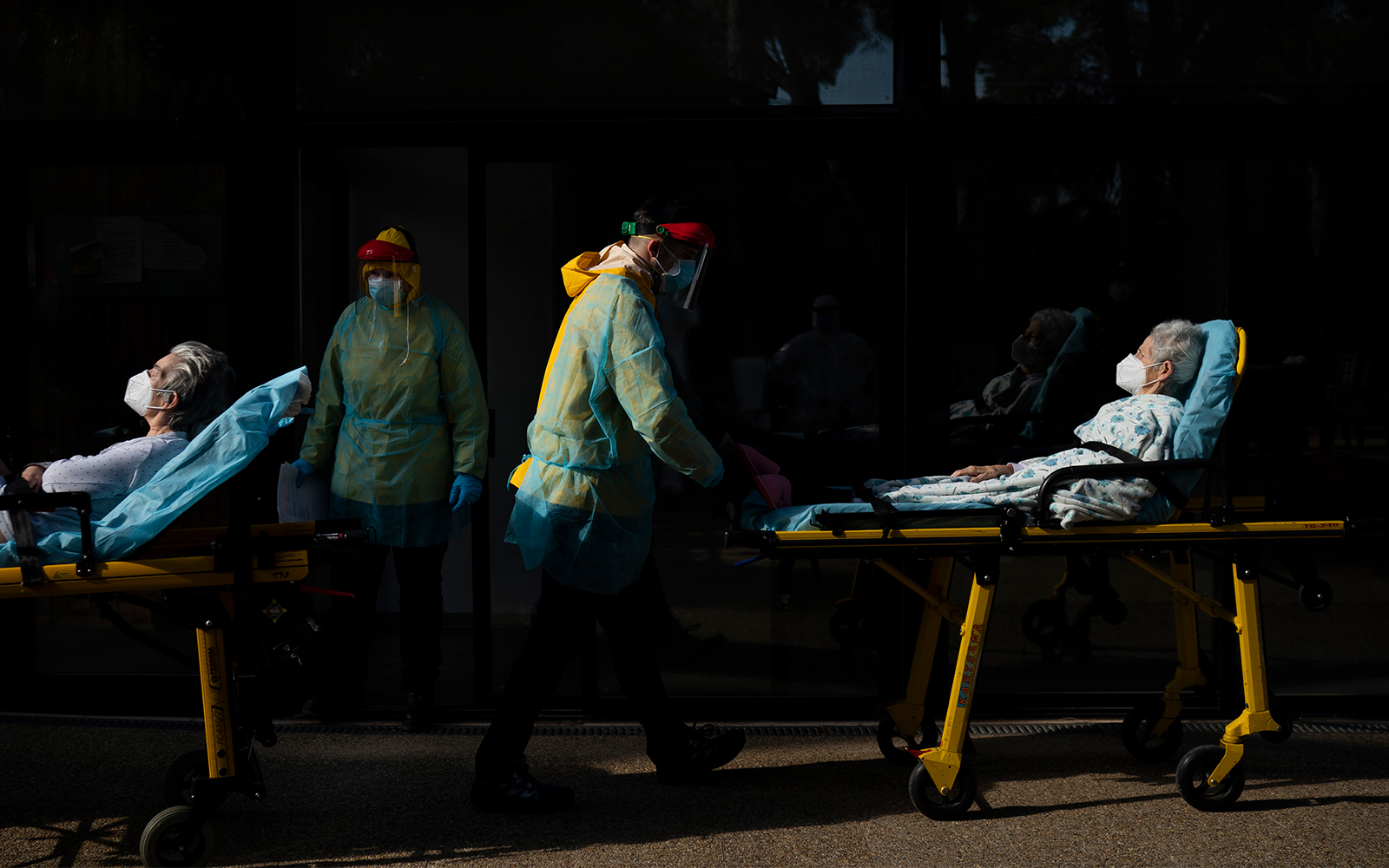 In the US, 6,912 deaths have been linked to outbreaks in nursing homes and long-term care facilities nationwide, according to a tally by The Associated Press.

Illustrating the spread, Africa reported its 1,000th death on Friday. The UN predicted on Friday that the continent under a best-case scenario will likely see 300,000 deaths this year; without any interventions, the death toll could reach 3.3 million.

China has recorded 4,636 deaths, on Friday increasing the official toll for Wuhan by 1,290 — a precise 50 percent — to 3,869. Beijing is battling a new outbreak in its northeastern Heilongjiang province on its border with Russia, where 27 new cases were reported on Friday.

US President Donald Trump, who has been accused of reacting too slowly to the coronavirus threat, alleged that Beijing’s numbers were still untrue.

Trump did not offer evidence, but pressure has mounted in recent days on Beijing to come clean over its handling of the original outbreak, as US media reported suspicions the virus came not from a Wuhan wet market as first claimed, but from a poorly-managed nearby research facility studying bat-related diseases. 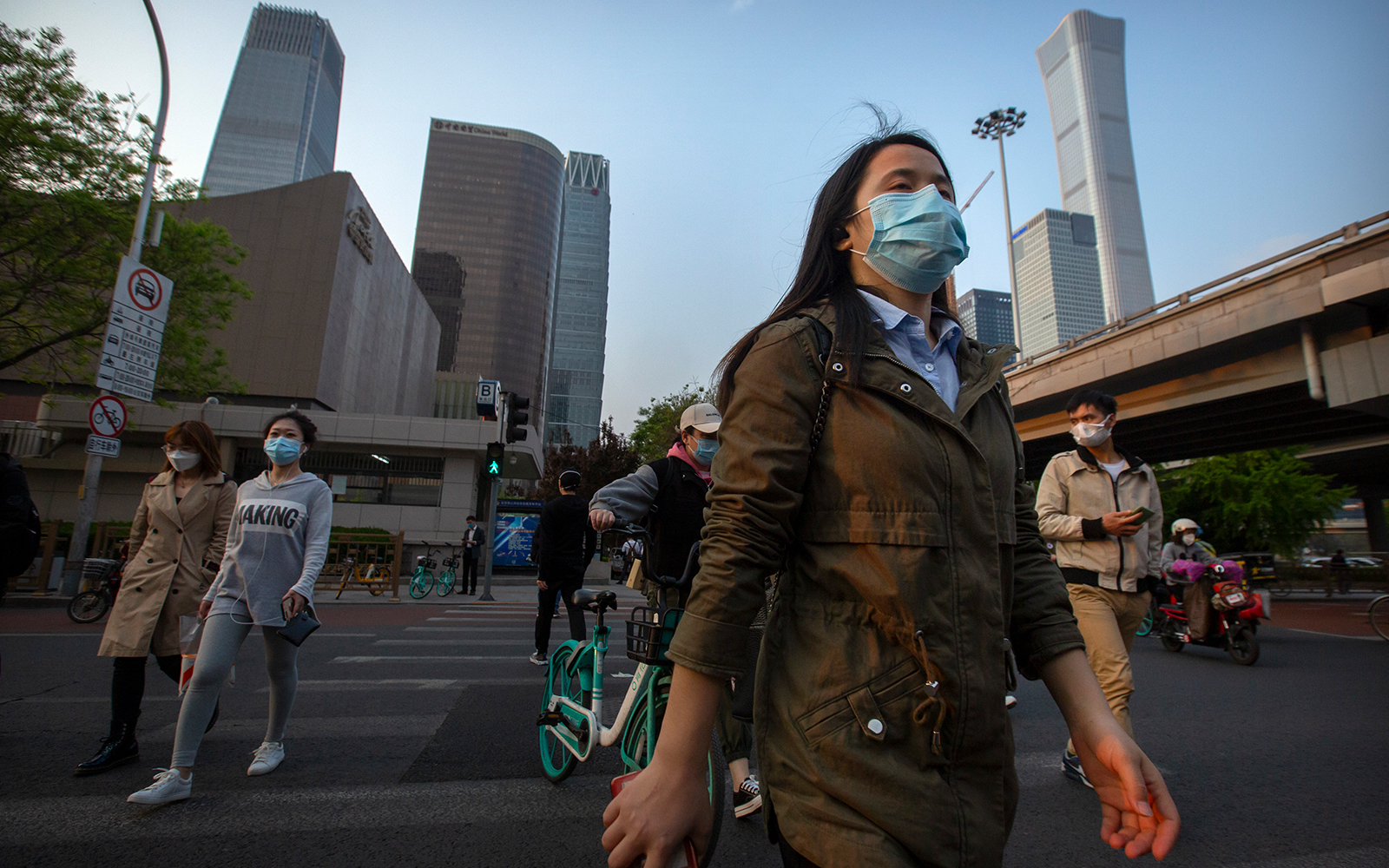 Leaders in France and Britain have also questioned China’s management of the crisis, and French President Emmanuel Macron said it would be “naive” to think Beijing had handled the pandemic well.

Beijing hit back earlier Friday, insisting there had been no cover-up.

Governments around the world are grappling with the question of when to reopen society, seeking a life-and-death balance between unfreezing stalled economies and preventing a second deadly coronavirus wave.

Germany became the latest country to unveil plans to lift some restrictions, and the first major European nation to take on the delicate task of reopening without triggering a new wave of infections.

The government declared its outbreak “under control” and said select small shops will be allowed to reopen Monday and some children would return to school within weeks.

Switzerland, Denmark and Finland were among those gradually re-opening shops and schools, and even in hard-hit Italy, people began emerging from lockdown, with Venice residents strolling around quiet canals stripped of their usual throngs of tourists. 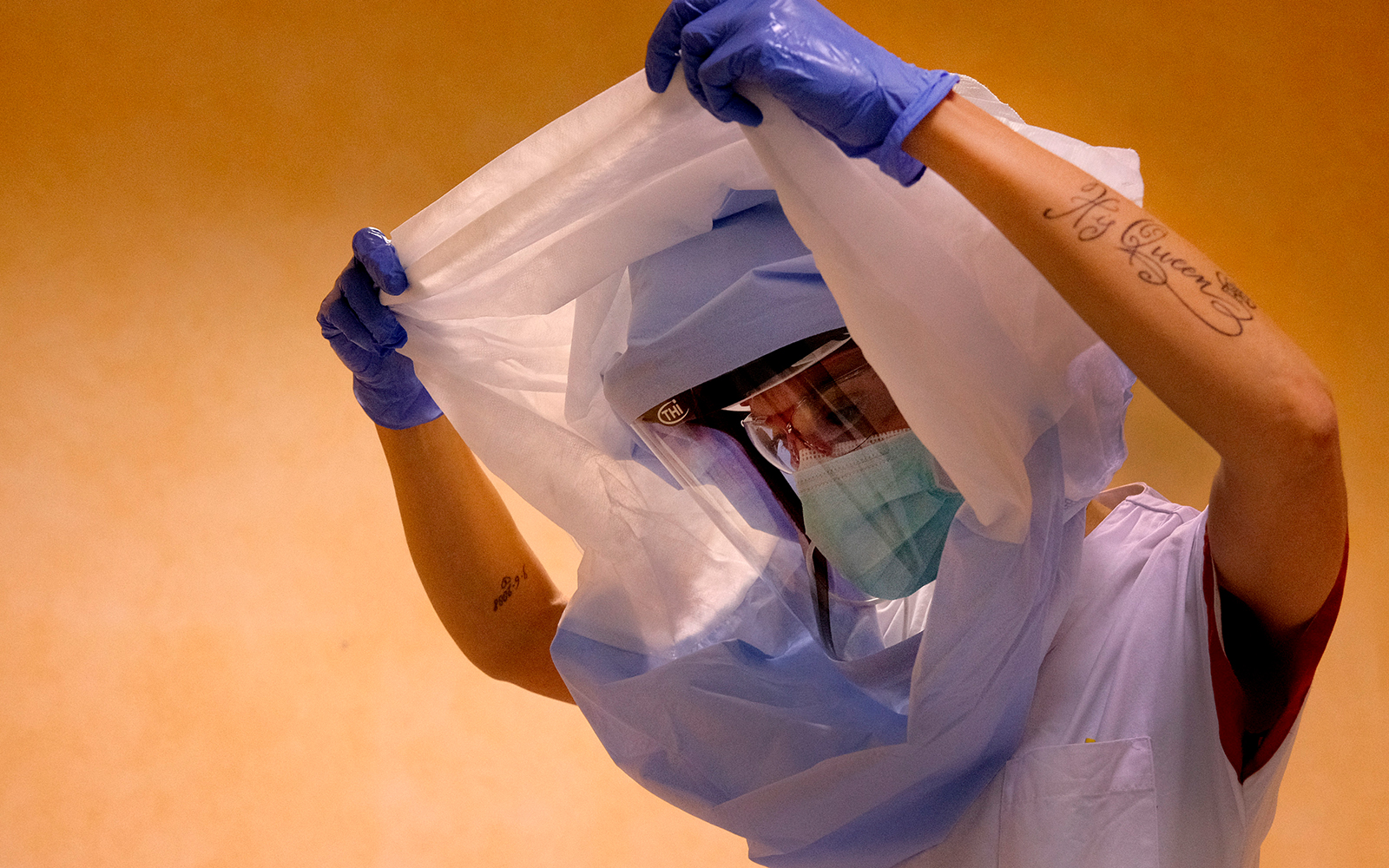 A nurse prepares to enter the intensive care unit of the COVID-19 department of the Policlinic of Tor Vergata Rome, Italy, April 17, 2020.

But Japan, Britain and Mexico all expanded current restrictions.

And in Russia, recorded infections topped 32,000 as President Vladimir Putin warned that “the risks surrounding the epidemic’s spread are still very high, not just in Moscow but in many other Russian regions.”

In the United States, a more complex picture was emerging.

Trump, whose reelection in November could hinge on how fast US life returns to normal, appeared to lend support to protests against stay-at-home orders in several states — although he has officially left it to governors to decide when to lift lockdowns.

Minnesota, Michigan and Virginia are all led by Democratic governors.

Responding to pleas from some governors for help in ramping up testing for the virus, Trump put the burden on them, tweeting: “The States have to step up their TESTING!”

In Florida the governor, a close Trump ally, gave a green light to reopening some beaches and parks. 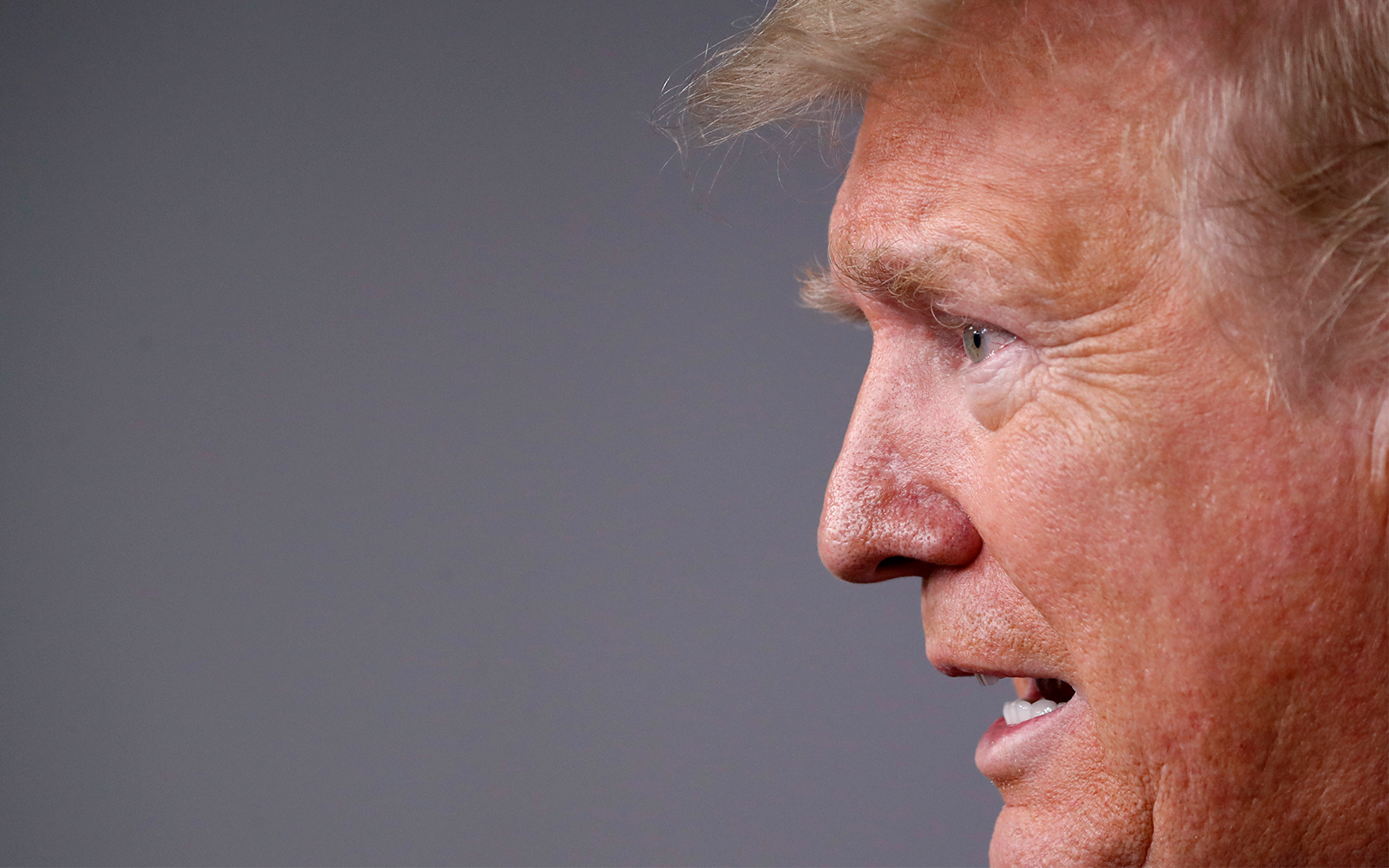 US President Donald Trump speaks about the coronavirus in the James Brady Press Briefing Room of the White House, Washington, April 17, 2020.

But in New York state, with its namesake city the hardest hit in the world by the coronavirus, Cuomo extended a shutdown order until May 15, as he accused Trump of not helping in efforts to expand testing. New York state is still seeing over 600 deaths a day.

Signs of the economic damage of the pandemic also mounted.

China reported Friday its GDP shrank 6.8% in the first quarter, the first contraction since quarterly growth data started in the early 1990s.

Lockdown measures were starting to pinch some of the world’s most vulnerable economies.

Tobacco farmers in Zimbabwe fear a delayed start to the normally busy auction season, the lifeblood for thousands of growers in impoverished rural regions, due to lockdown measures.

“This year our harvest hasn’t been good at all,” farmer Shaw Mutalepo told AFP, as workers in face masks crunched cured leaves into large bales.

The IMF and World Bank said that Africa needs another $44 billion to fight the pandemic, even after a freeze in debt payments for many countries and massive support pledges.

The IMF also warned the virus could spark another “lost decade” in Latin America, with debt moratoriums said not to be enough to support them.

The US on Friday marked an increase of 3,856 deaths in the past 24 hours, but that figure likely includes “probable” virus-linked deaths, which had not previously been counted. 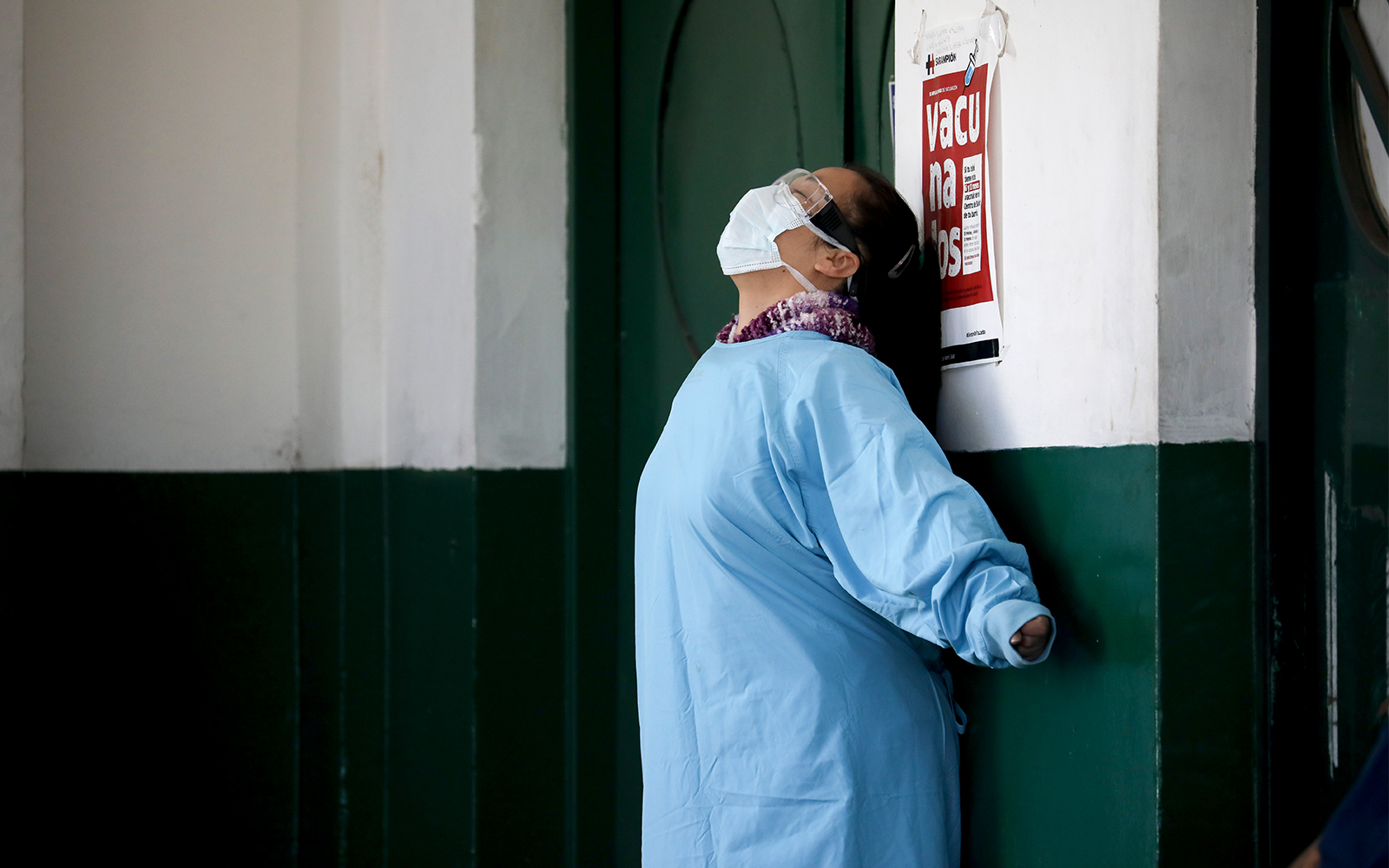 A worker at the Manuel Belgrano public hospital on the outskirts of Buenos Aires, Argentina, April 17, 2020.

Authorities say infections and deaths have been under-reported almost everywhere. Thousands have died with COVID-19 symptoms — many in nursing homes, which have been ravaged by a disease that hits the elderly the hardest — without being tested. Four months into the outbreak, nations are still struggling to increase their testing capacity, and many are still far from their goal.

Trump on Friday announced a $19 billion financial rescue package to help the agriculture industry weather the staggering economic downturn sparked by measures to defeat the coronavirus.

The program will include direct payments to farmers, ranchers and producers who Trump said have experienced “unprecedented losses during this pandemic.”

Agriculture Secretary Sonny Perdue said US farmers have been hit hard by a sharp shift in demand, as schools and restaurants close and more Americans eat at home.

That has disrupted the food supply chain, forcing farmers in many places to destroy dairy output and plow under crops that no longer have buyers.

Farmers are having trouble finding seasonal laborers to prepare and harvest crops; some meatpacking plants have been hit hard by COVID-19 outbreaks.

The number of people applying for unemployment benefits in the US rose by 5.2 million, bringing the four-week total to a staggering 22 million. US unemployment could reach 20% in April, the highest since the Depression of the 1930s. Layoffs are spreading well beyond stores, restaurants and hotels to white-collar professionals such as software programmers and legal assistants. 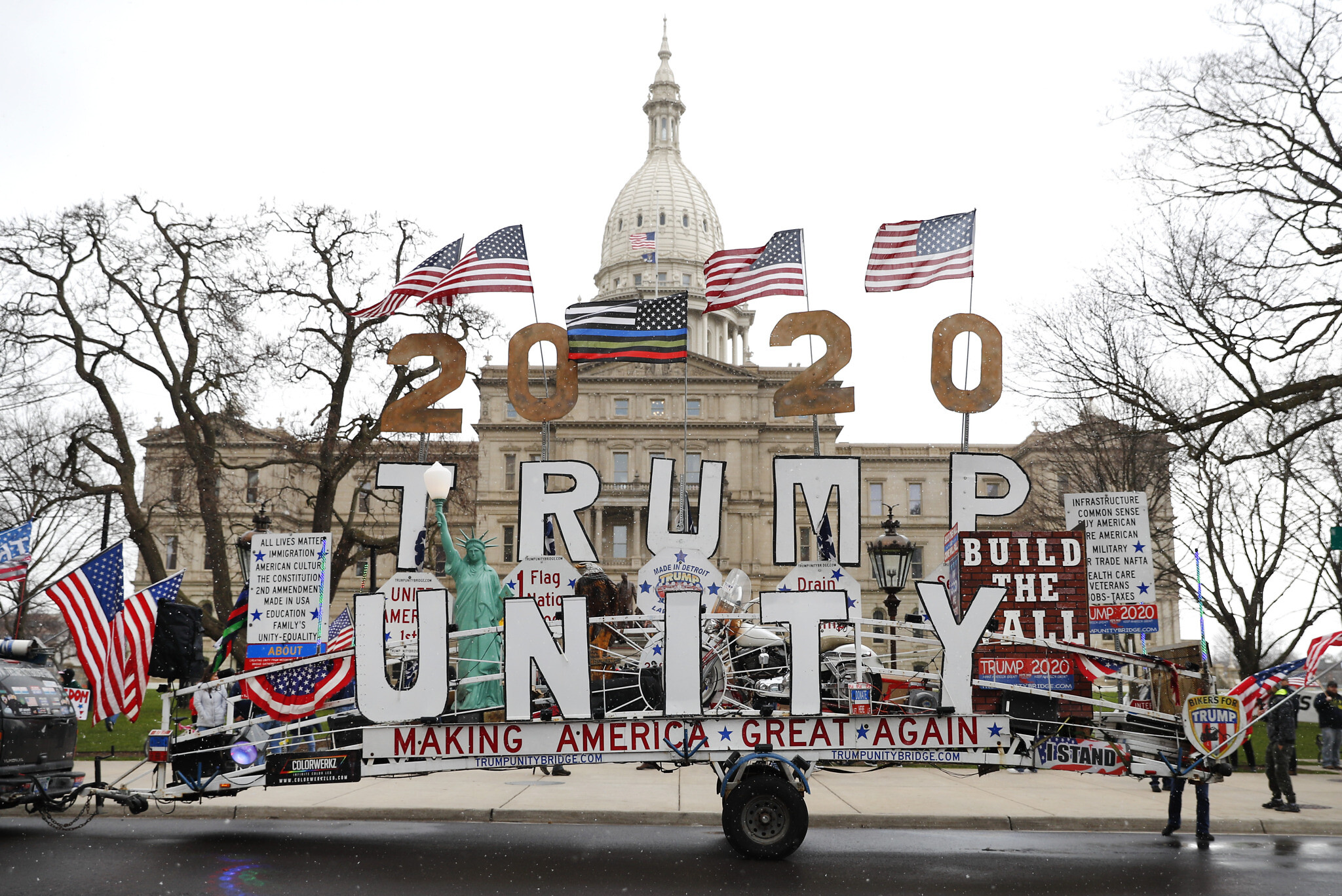 A Trump Unity sign on a trailer is shown parked at a protest in front of the Michigan State Capitol in Lansing, Michigan, April 15, 2020

Trump on Friday said he hopes to resume holding the political rallies that were a hallmark of his presidency before the coronavirus pandemic hit the United States.

“I hope we can do rallies. It’s great for the country,” Trump told a press conference, calling the events “a tremendous way of getting the word out.”
Like millions of Americans, Trump has for weeks been largely confined to his home — in his case the White House — as part of mass social distancing measures.

Although there seems to be little chance of holding packed gatherings with thousands of people in the near future, Trump said they will eventually be “bigger than ever.”

He announced he would be making a rare trip out of Washington to deliver the commencement address at the West Point military academy in New York, which is scheduled for May 23.

Throughout his time in office, Trump has held campaign-style rallies around the country and he had been set to ramp up the rhythm ahead of the November 3 presidential election.

Trump said he wouldn’t want to hold rallies where social distancing is in force.