A majority of the United National Party (UNP) parliamentarians claim that the political alliance under the name of Democratic National Front, which is being formed by Minister Rajitha Senaratne with the blessings of UNP Leader, Prime Minister Ranil Wickremesinghe, would result in the dissolution of the UNP as a political force.

A group of UNP ministers have handed over a letter to Wickremesinghe outlining the fate of the UNP in the event the draft Constitution of the proposed political alliance is implemented. The letter was sent yesterday (July 31) and is to be taken up for discussion at today’s UNP Working Committee meeting scheduled to be held this morning at Temple Trees.

The UNP MPs have pointed out that the proposed Constitution of the Democratic National Front would undermine the rights of the UNP parliamentary group, especially the party’s Working Committee to decide on the UNP’s candidate at the next presidential election.

Clause 23 (b) of the Constitution has pointed out the manner in which nomination of candidates would take place for parliamentary, provincial council and local government elections.

However, the clause does not refer to the selection of a candidate for the presidential election.

Clause 62 of the proposed Constitution states, “The Leadership Council shall be entitled to take suitable decisions on all matters on which Constitution is silent.”

Therefore, the Leadership Council of the proposed alliance would make the final call on the matter.

The members of the Leadership Council have been explained in Clause 19.

It states “i)There shall be a Leadership Council consisting of not less than ten (10) members who shall, subject to the provisions of this Constitution, enjoy equal status and authority.

“v) A person nominated by a constituent party to the Leadership Council shall, unless Parliament is dissolved at the time of nomination, be a Member of Parliament.

Clause 20 of the proposed Constitution has given decision making powers to the UNP nominee.

The clause states, “If the Council is unable to reach consensus on any issue, the decision shall be supported by a majority of the members of the Council AND a majority of the constituent parties represented in the Leadership Council. The values of the vote of the nominee of the United National Party shall be equal to fifty per centum plus one (50%+1) of the total membership of the Leadership Council.”

Therefore, Clause 20 of the proposed Constitution needs to be read along with Clause 23 (e) and 62.

Accordingly, UNP Leader Ranil Wickremesinghe has the power to either nominate himself or a representative of his choice as the presidential candidate and it cannot be challenged by any person.

In such a scenario, the powers currently vested with the UNP’s parliamentary group and the Working Committee to select the party’s presidential candidate with a majority vote will be taken away from the party.

In the event the proposed Constitution of the Democratic National Front is granted approval, the senior members of the UNP, which holds close to 80 percent of the vote base of the proposed alliance, would lose their democratic right to choose a candidate of their choice from their party.

Through the proposed alliance, Ranil Wickremesinghe will receive the opportunity of becoming the leader of the Democratic National Front for an indefinite period.

Clause 24 states, “There shall be a Leader of the Front. The Members of the Leadership Council shall at its first meeting and whenever a vacancy occurs in the position of Leader, select the Leader of the Front who shall function as the Head of Council for a given period decided by the Council.”

Betrayal of the UNPers powers

General Secretary of the alliance

The UNP will not receive the post of general secretary of the proposed Democratic National Front.

According to Clause 26 of the proposed Constitution, the Leader, General Secretary and Treasurer of the proposed alliance are selected according to the 70 percent consensus of the executive committee and the majority of the constituent parties.

It is learnt that Ministers Mano Ganesan, P. Digambaram, Rauf Hakeem and Rishad Bathiudeen have also voiced their concerns over the manner in which the proposed alliance is being formed.

They have informed Wickremesinghe that their political parties would join the alliance when the candidate for the next presidential election is announced.

The full text of the draft Constitution of the Democratic National Front is found below. 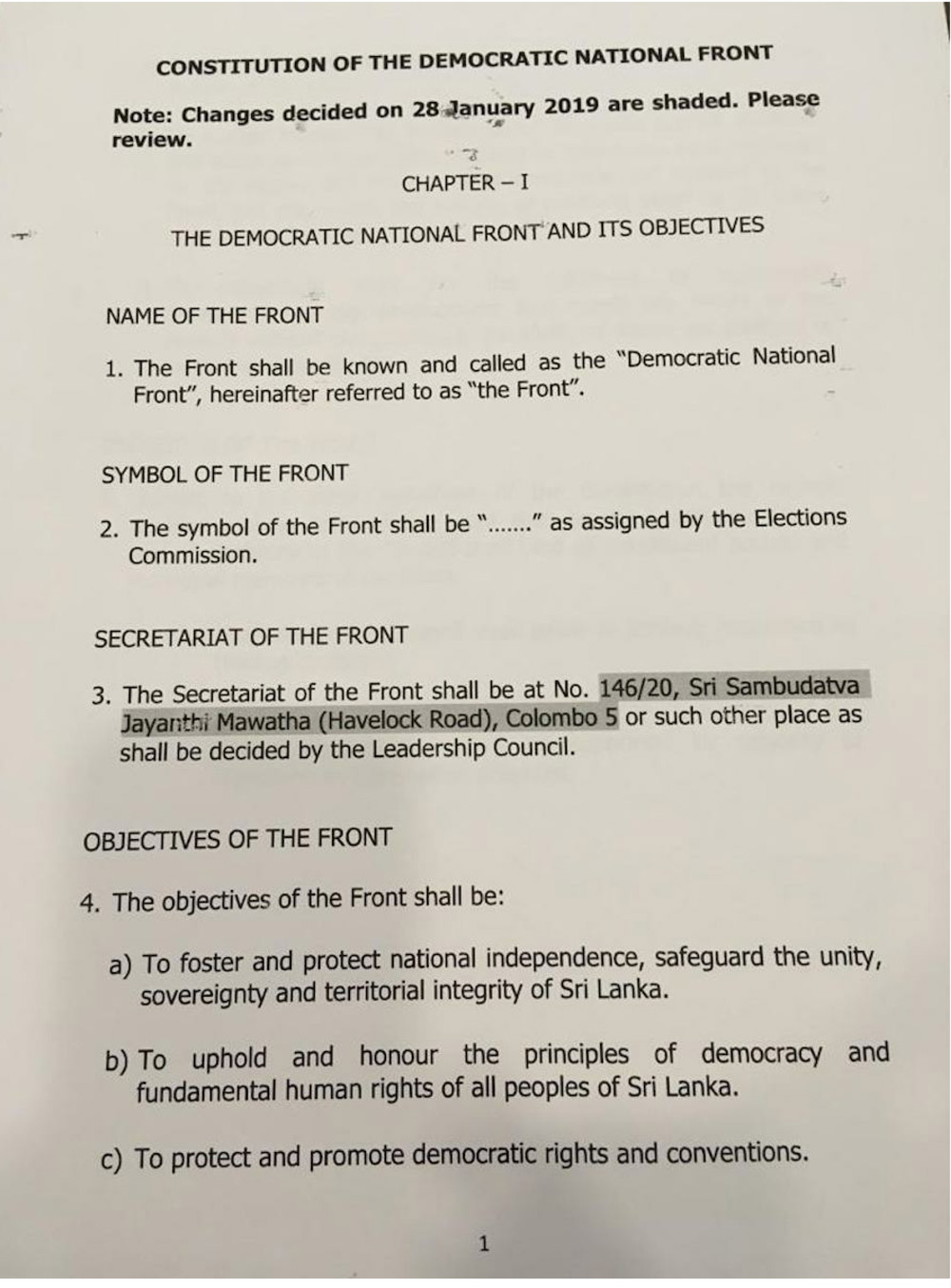 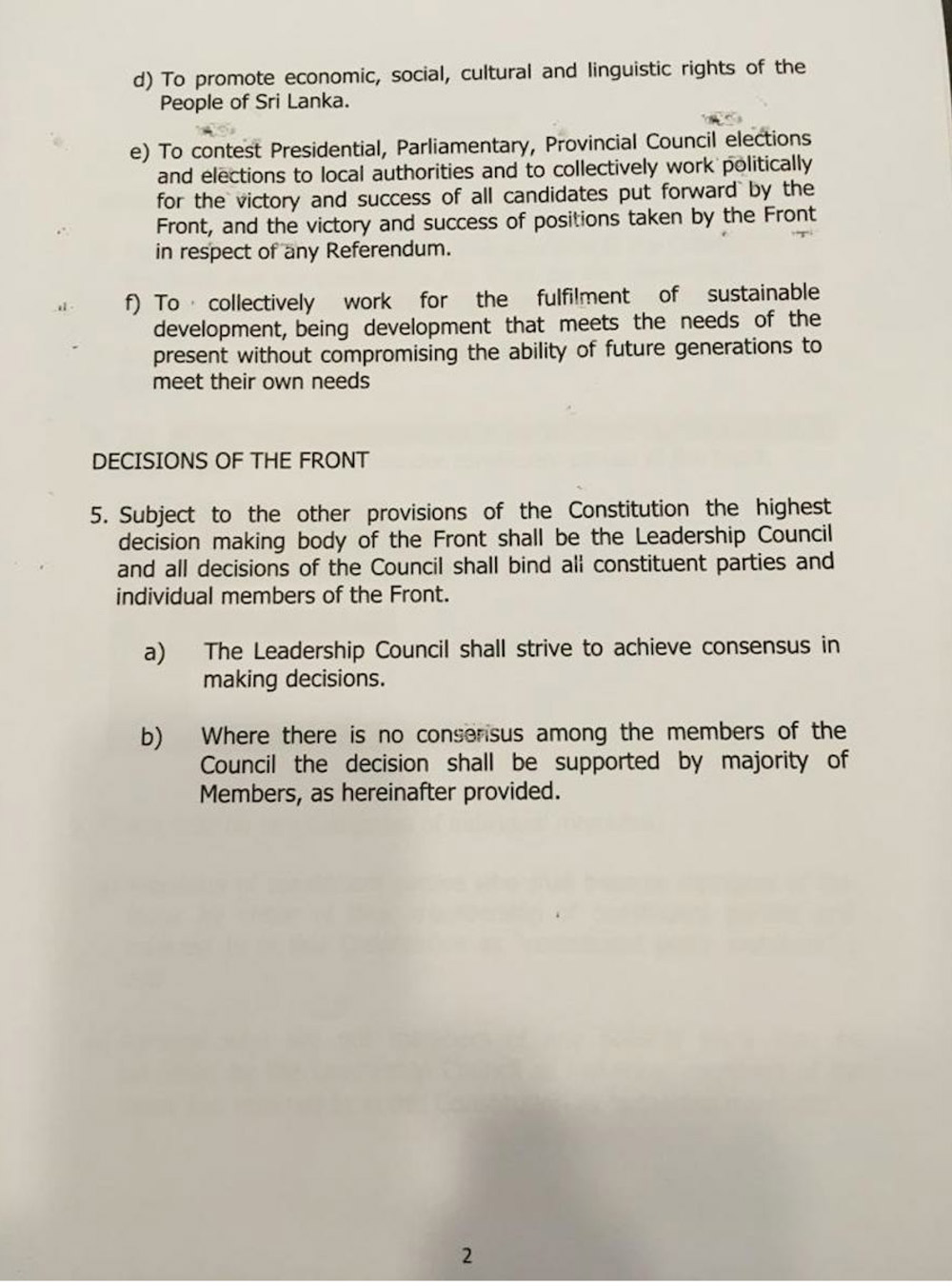 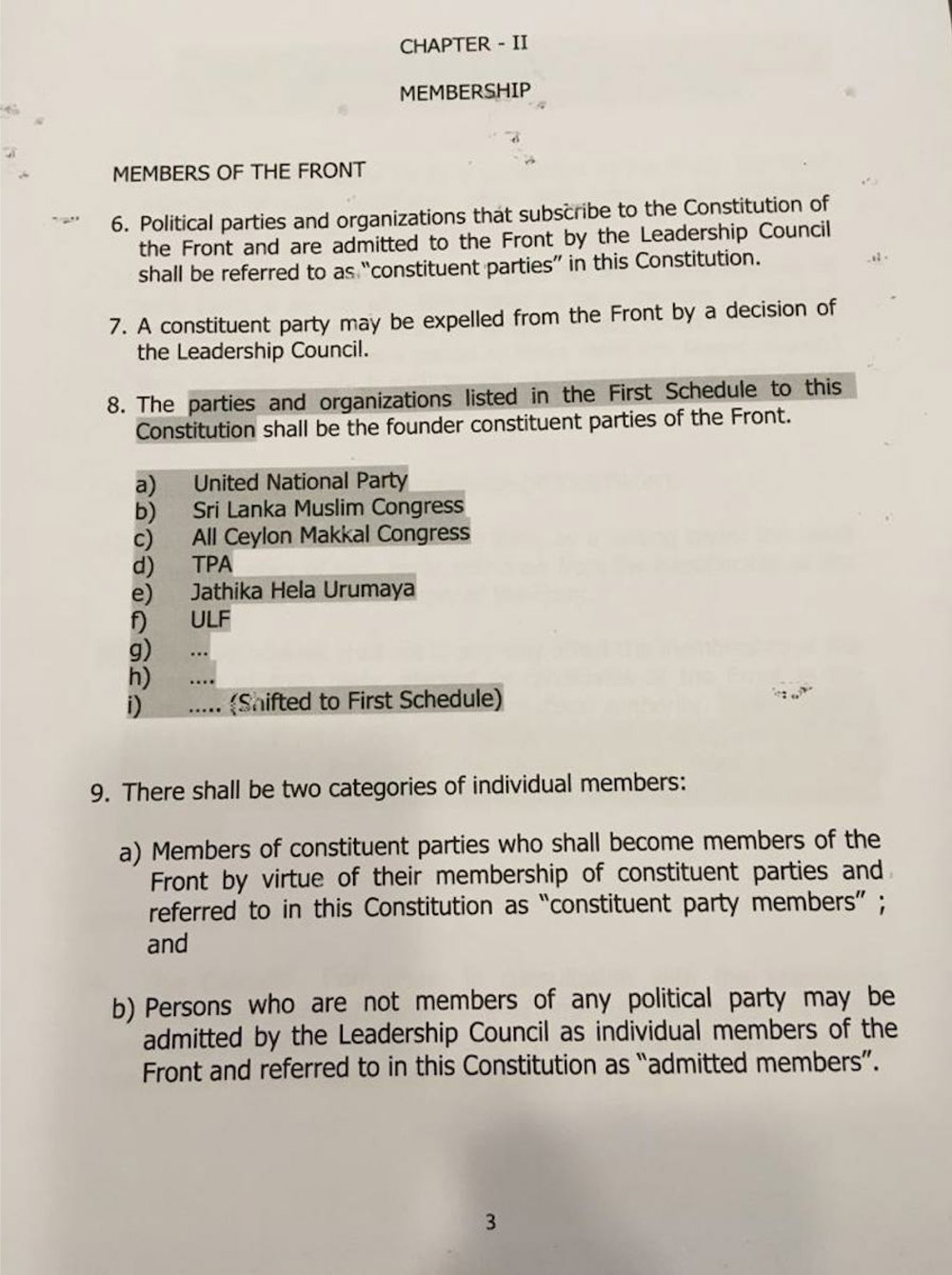 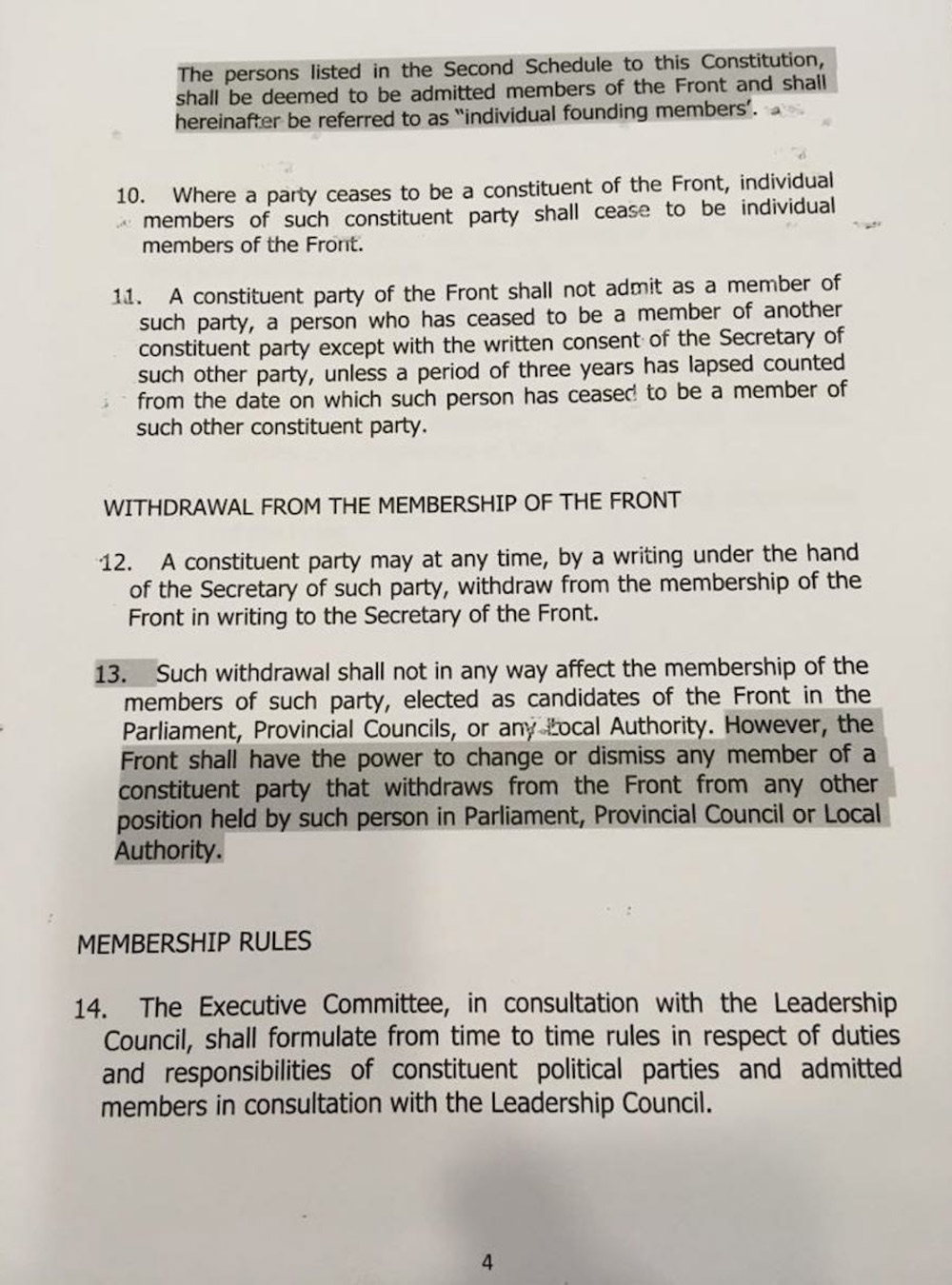 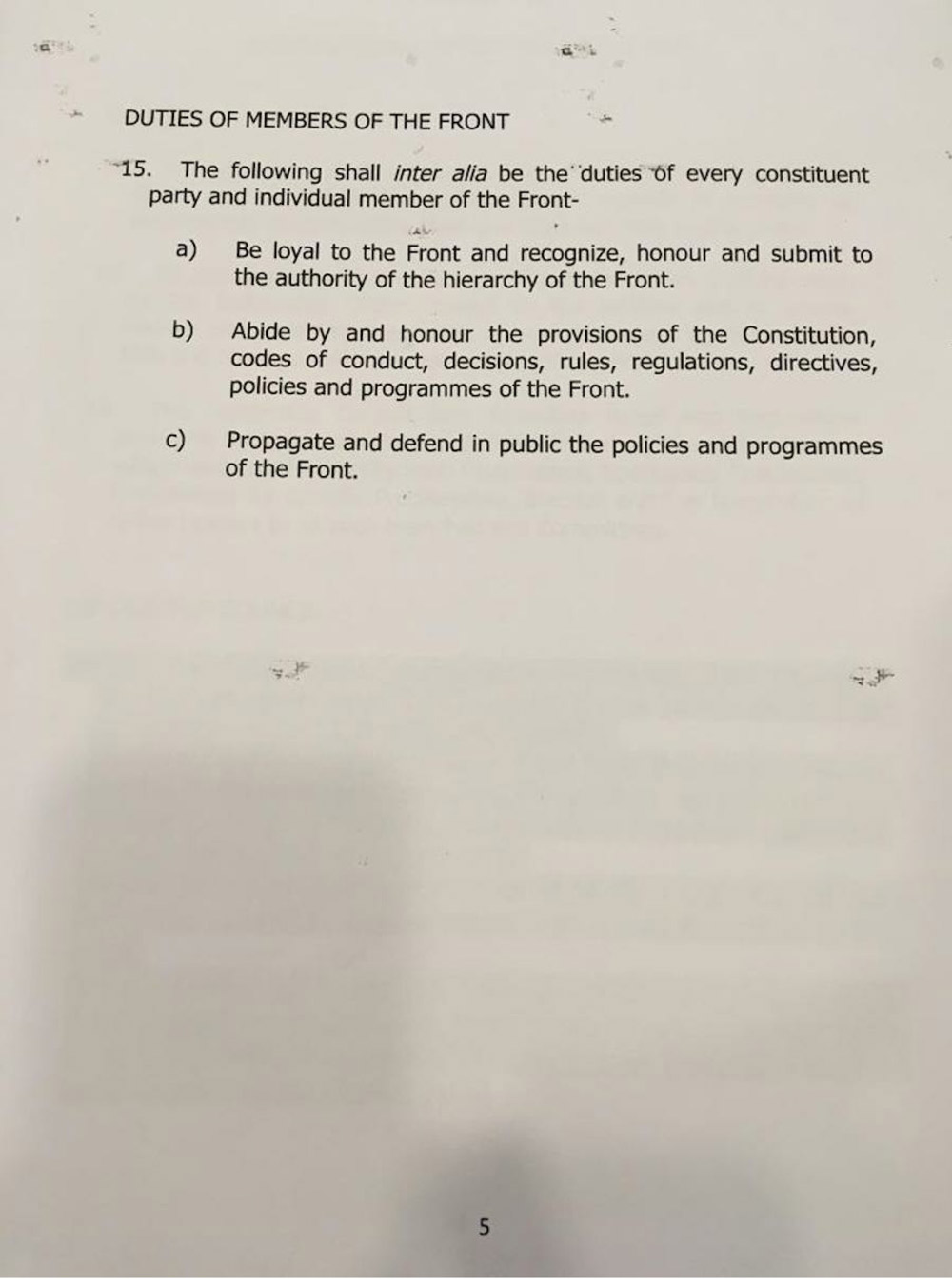 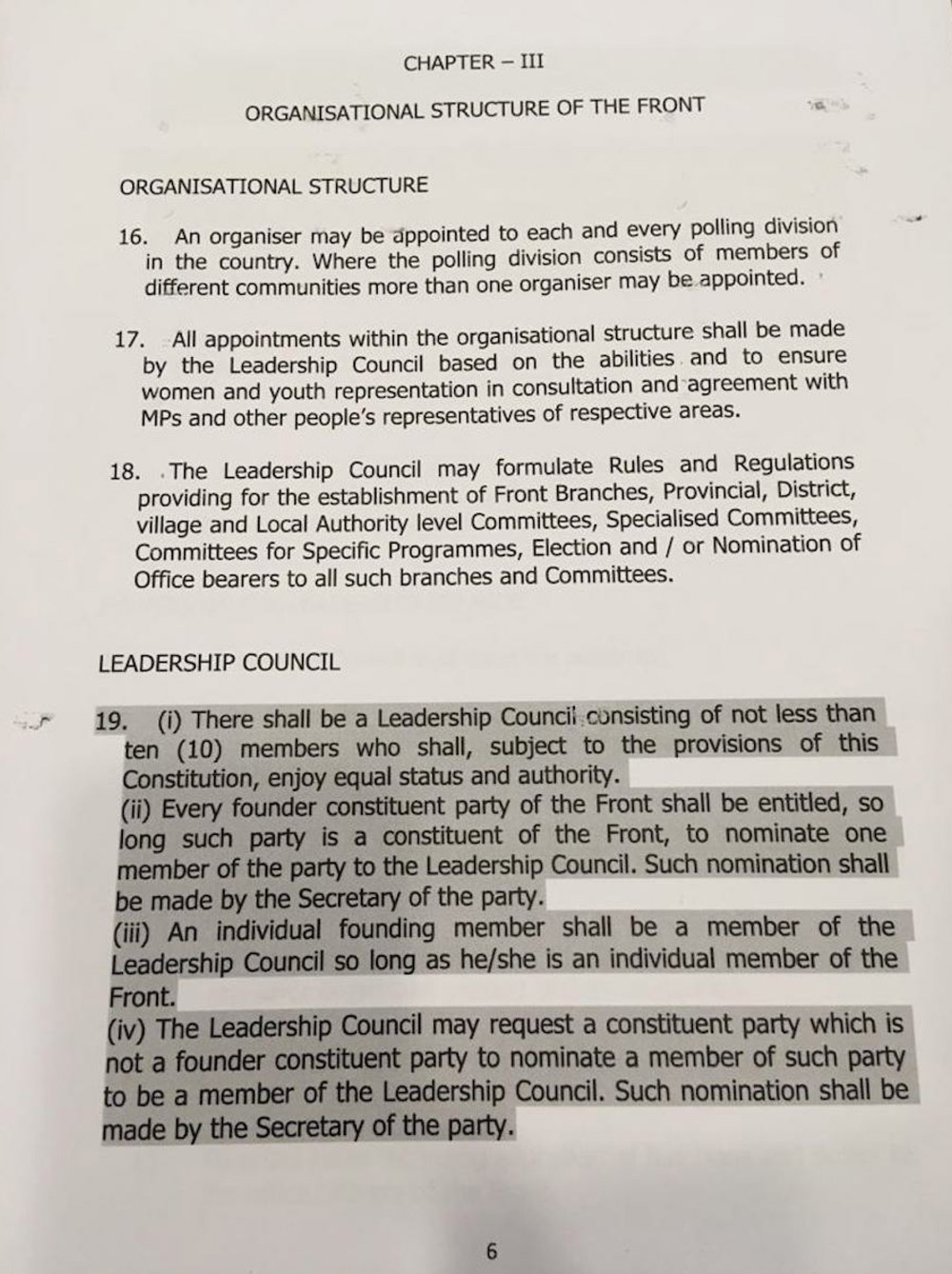 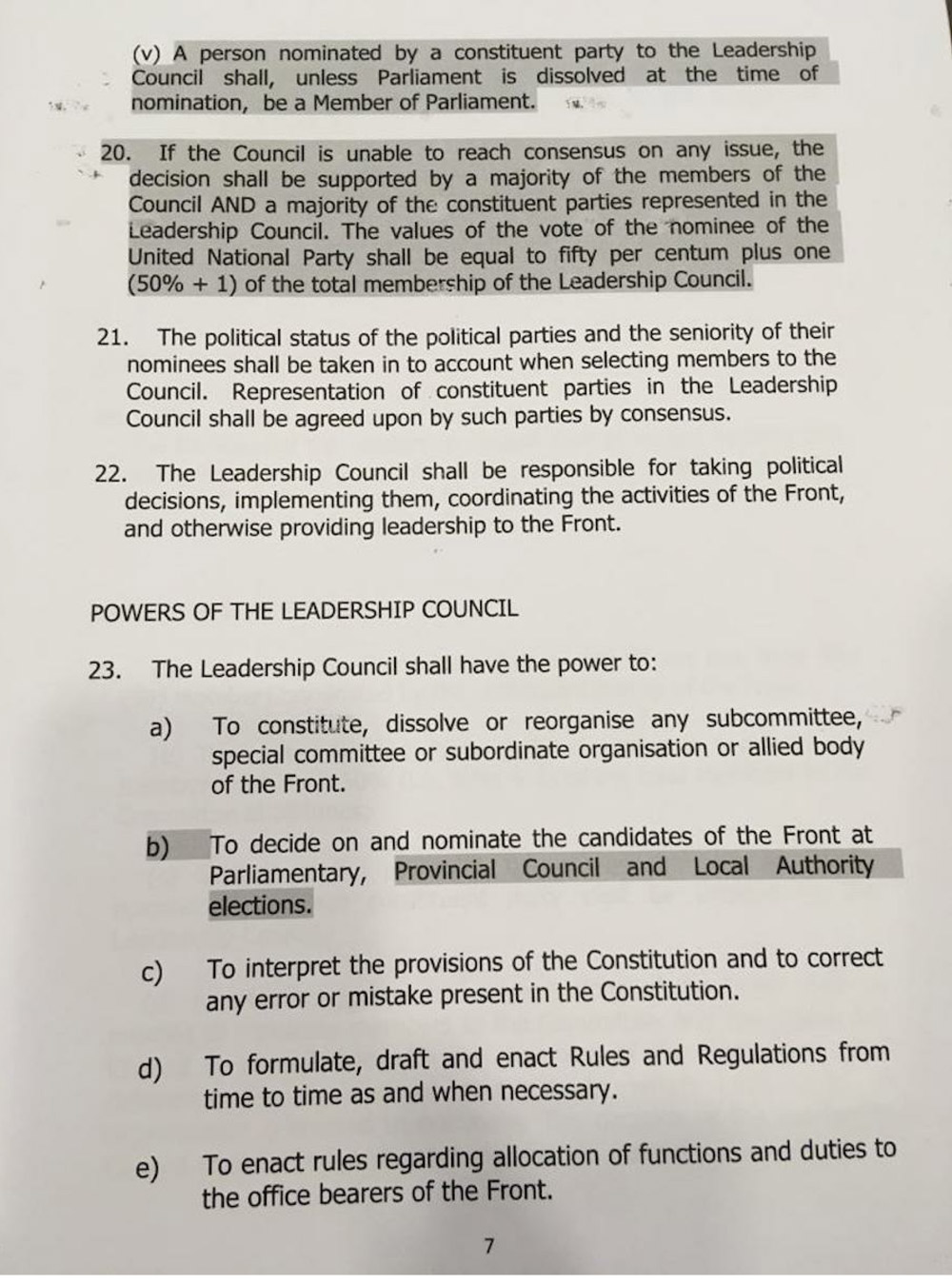 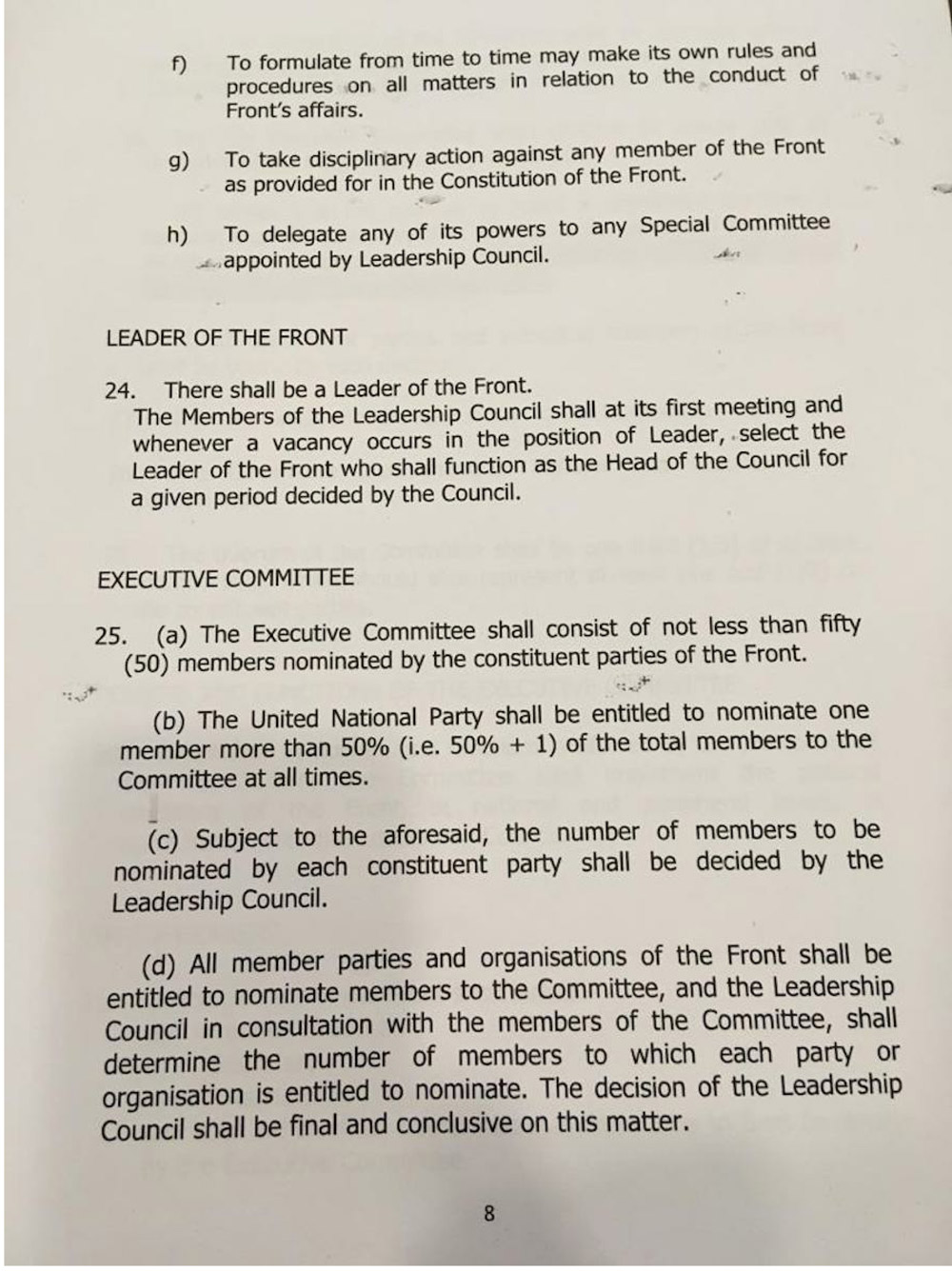 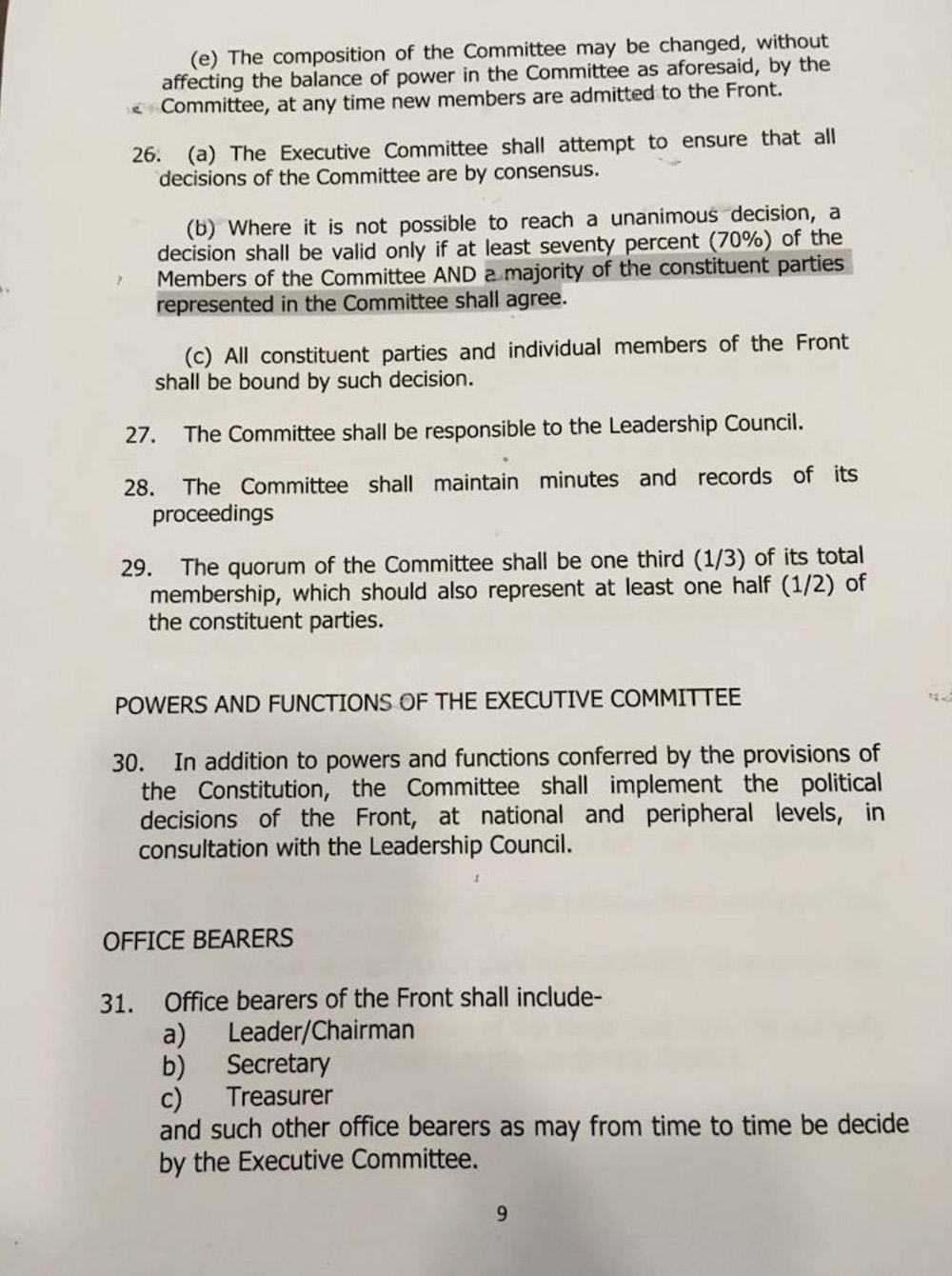 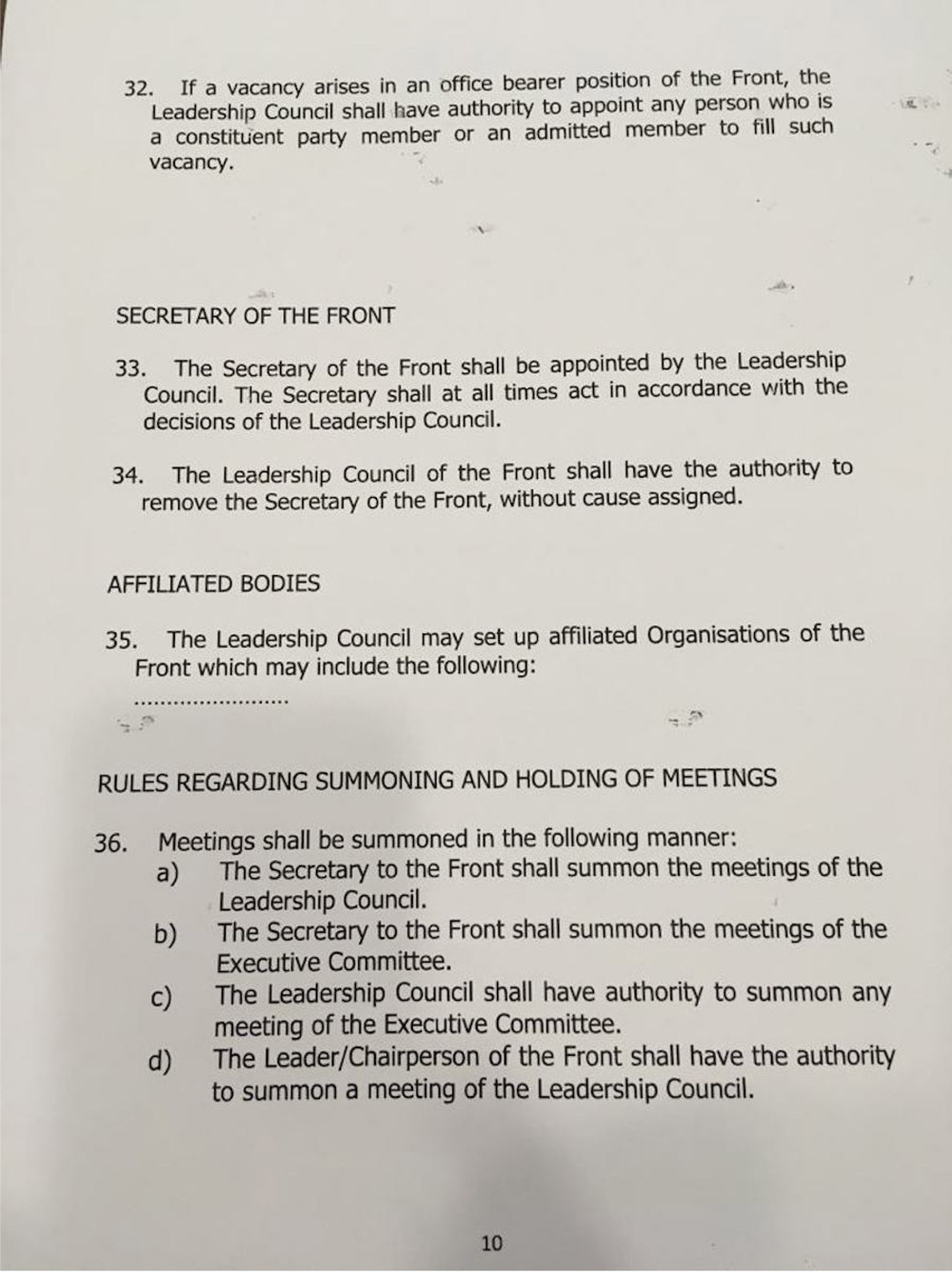 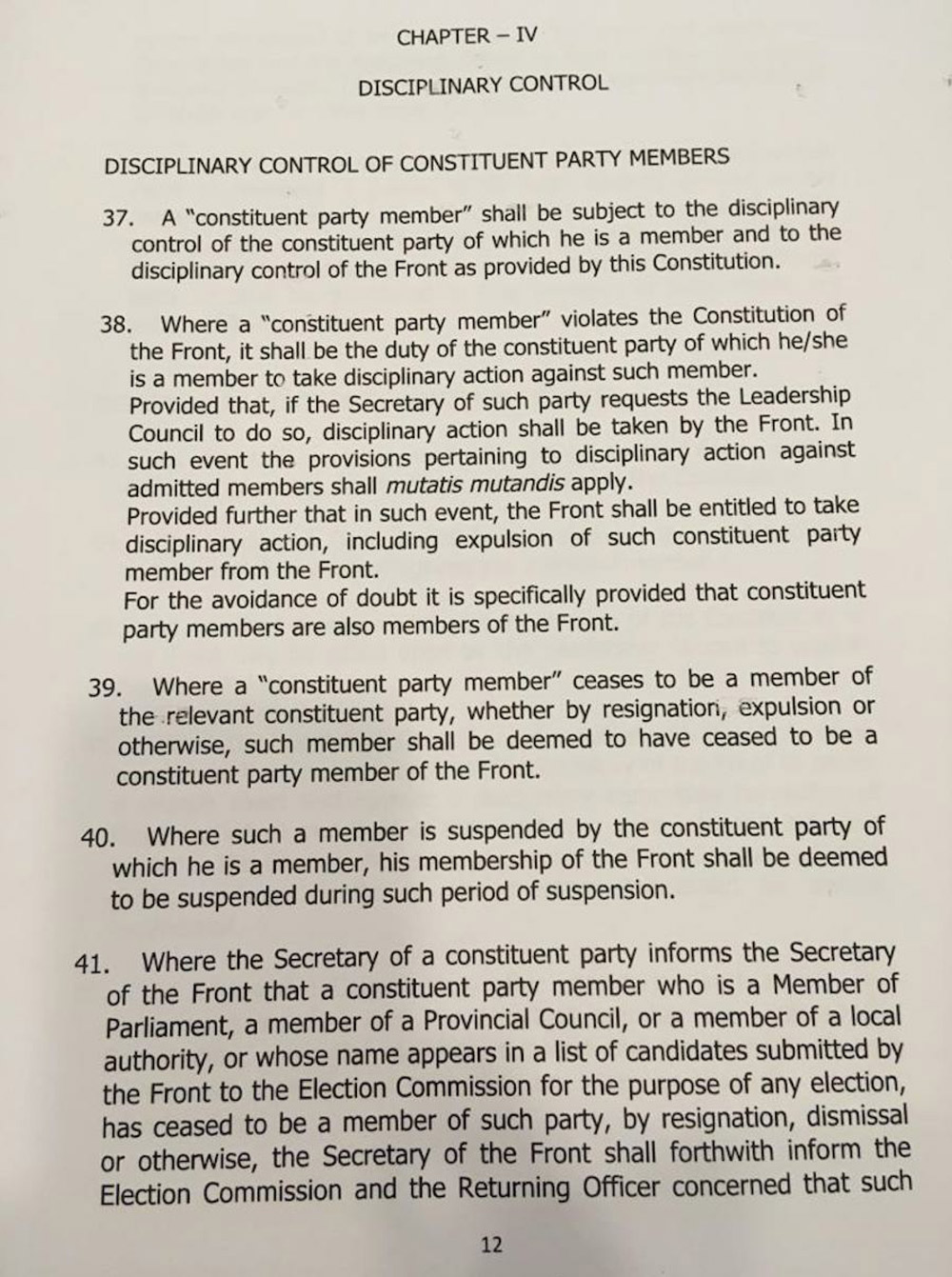 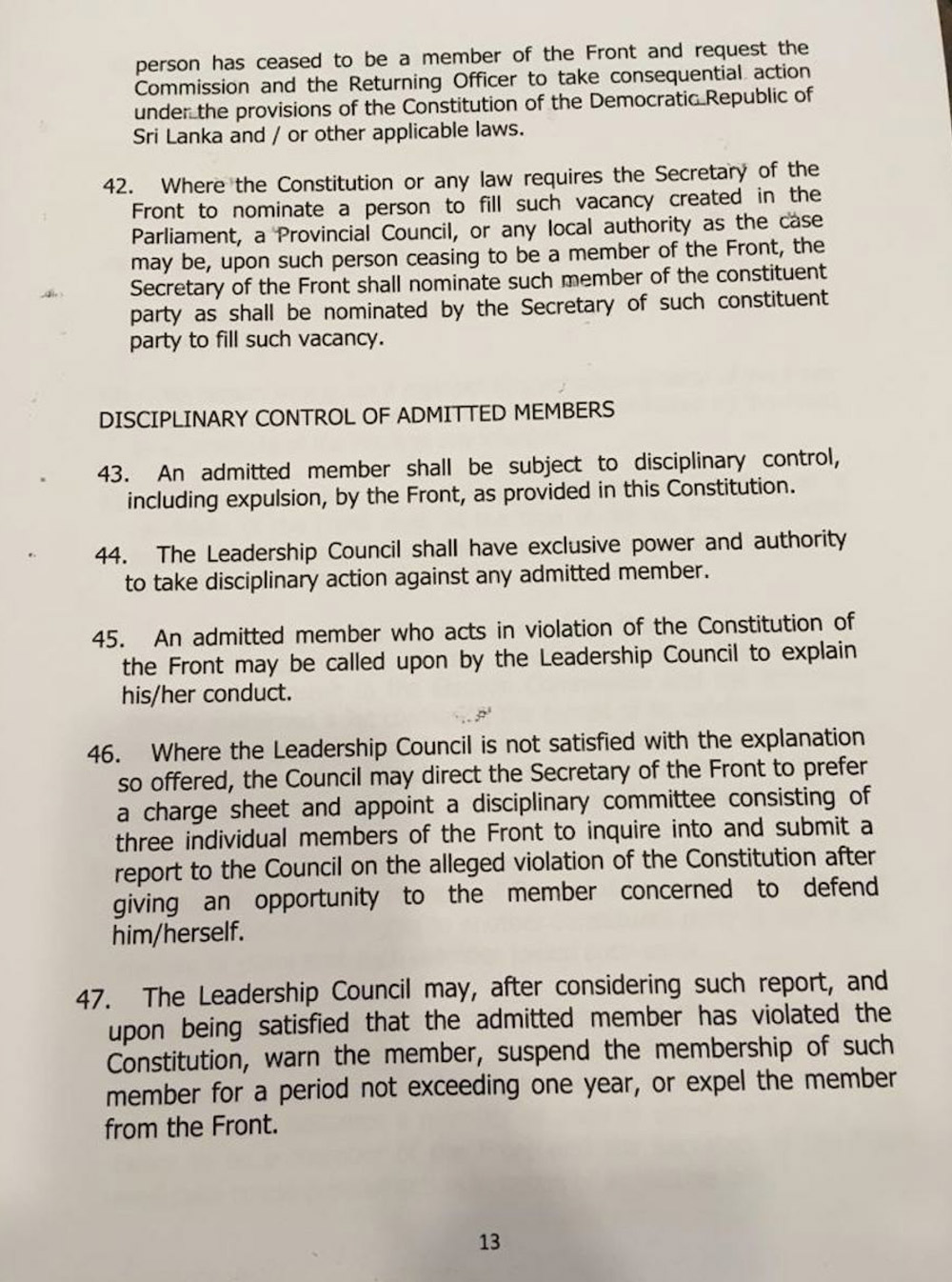 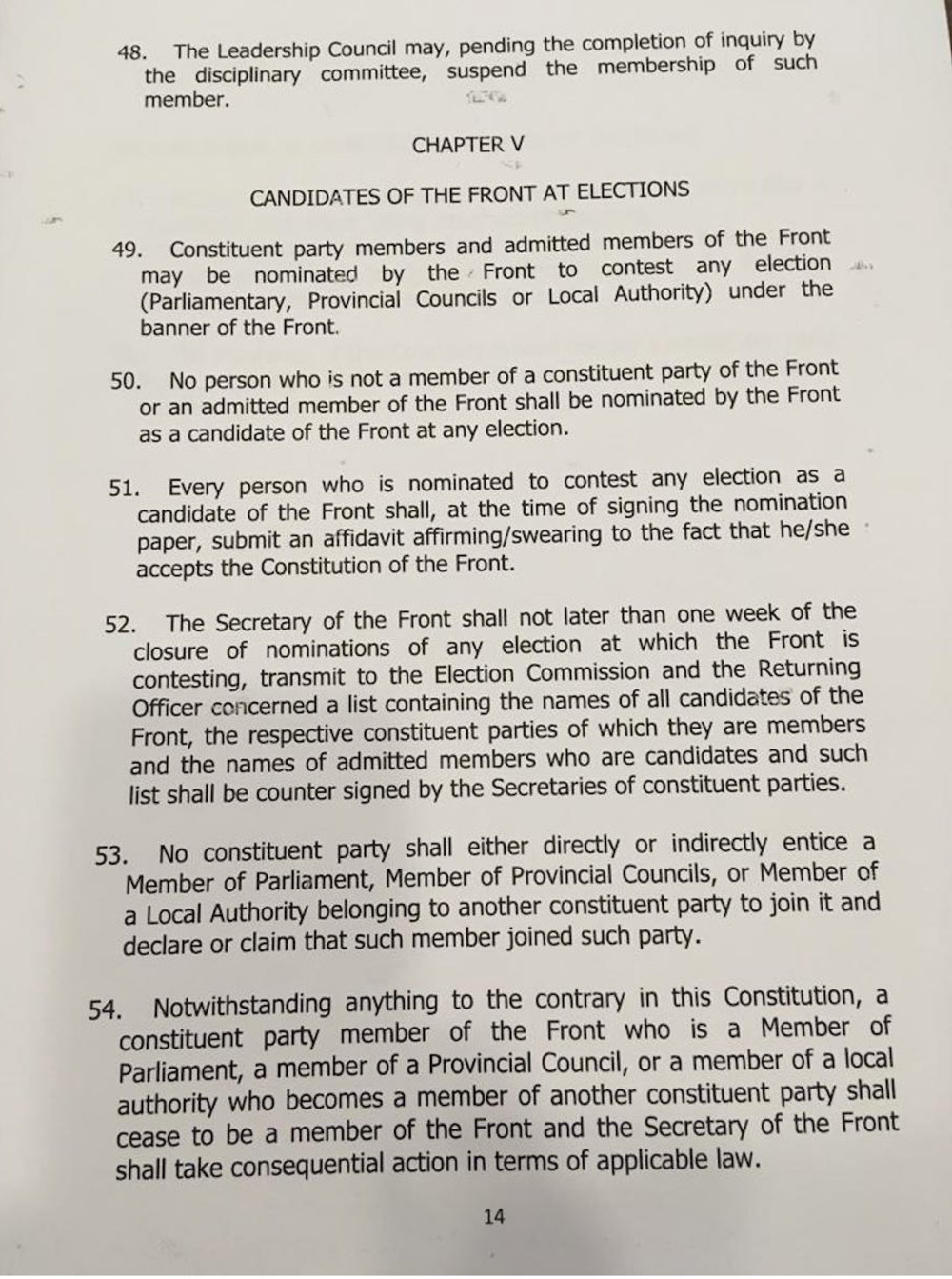 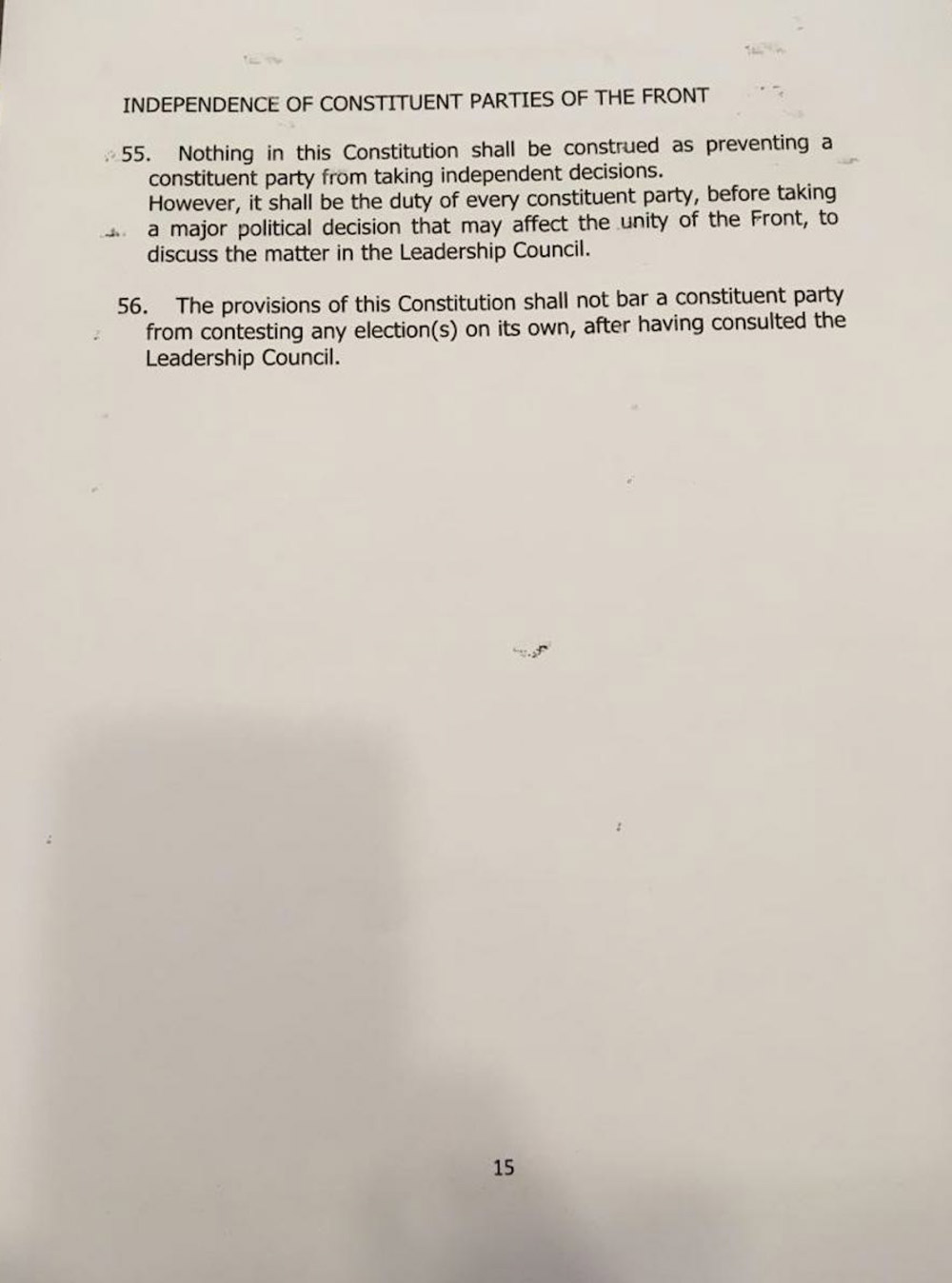 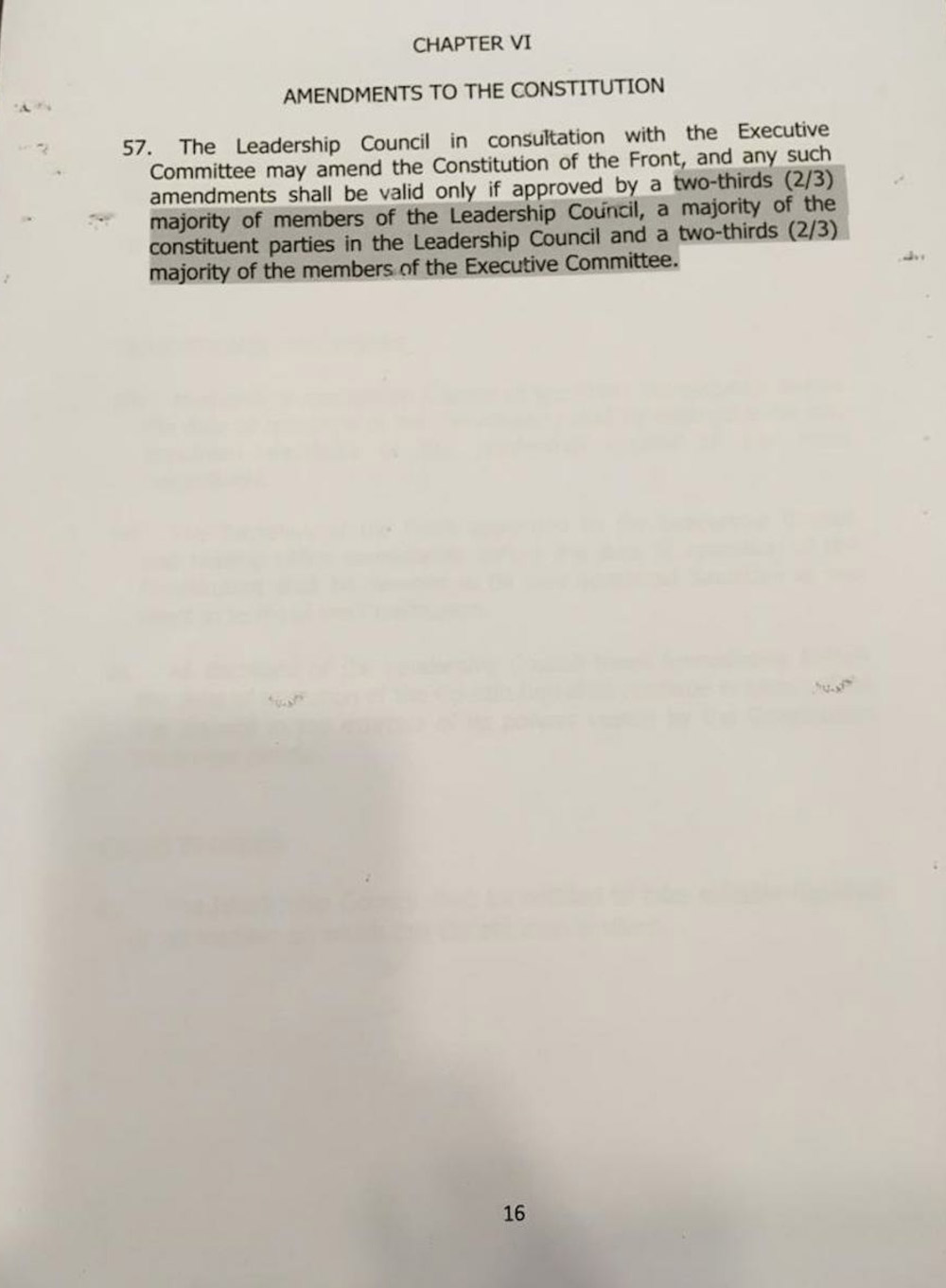 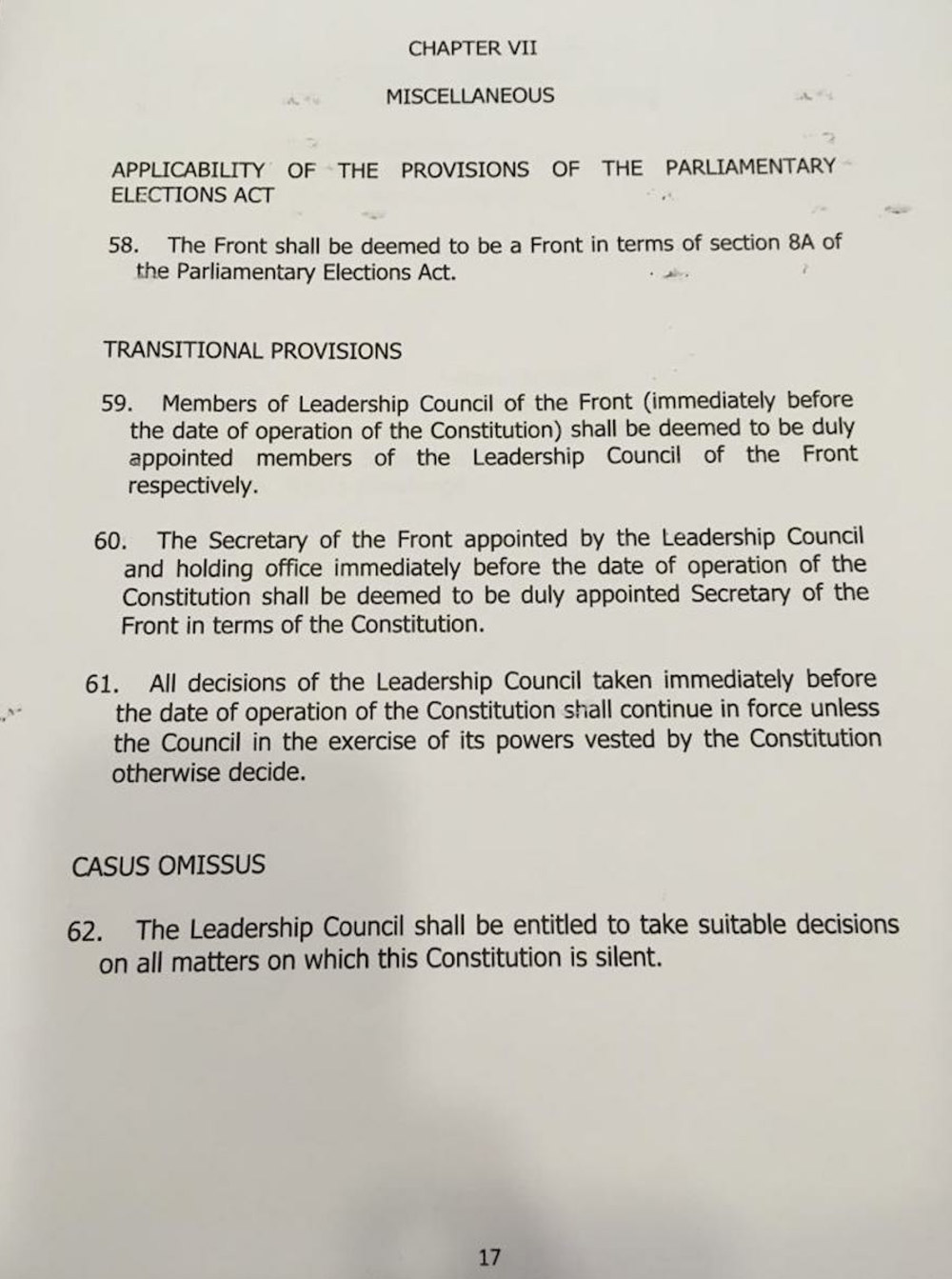 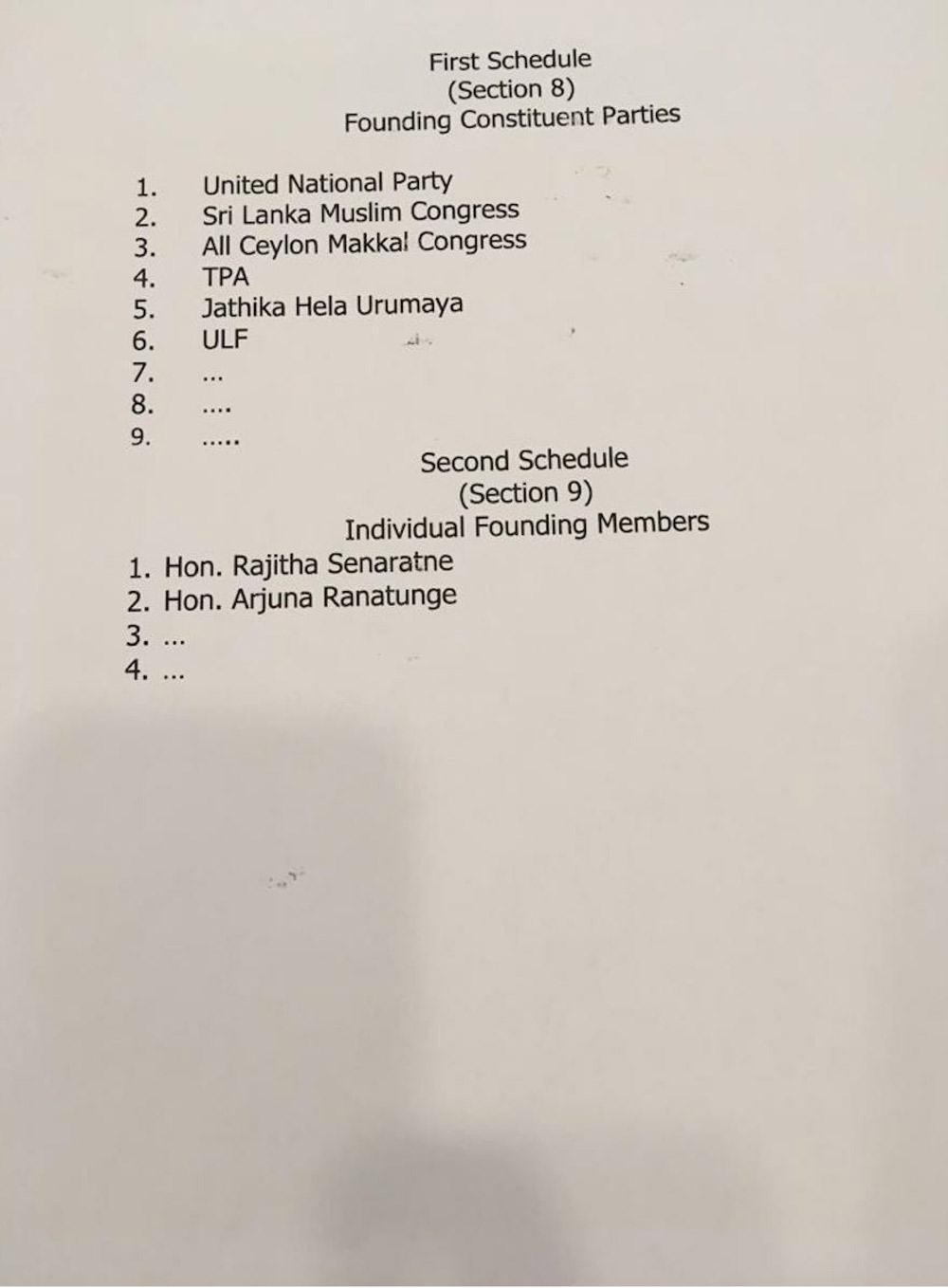